Click Here to Order Online for
Today or for the Holidays

About The Pie Shoppe

The Pie Shoppe is a full-line bakery and deli offering breads, cakes, cinnamon rolls, cookies, deli meats & cheeses, donuts, gobs, hoagies, pies, pizza, salads and so much more! We offer outdoor seating on our patio in warmer weather. We are now proudly celebrating our 75th year!

Arriving home after WorldWar ll, Melvin Columbus and his mother, Mildred, combined their talents and opened up their

bakery in September, 1947 in the small village of Laughlintown, PA. As a Navy cook, Melvin made homemade cinnamon rolls from the rations supplied on his battleship that was part of the fleet escorting the U.S.S. North Carolina. That cinnamon roll recipe is still used today.

Before opening The Pie Shoppe, Mildred gained her baking expertise running a boarding house in Kregar, PA. She served delicious homemade pies, breads and rolls to her guests, many of whom were building the Pennsylvania Turnpike between Somerset and Donegal.

In 1970, Melvin's youngest son, Tom, took over the business. Through the years, Tom has opened several other Pie Shops in the surrounding area: Ligonier, Latrobe and Donegal, but later sold his interest in them. He added the fundraising service to The Pie Shoppe in 1986. 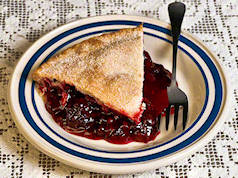 So, 76 years later, the pies and rolls are still homemade here in Laughlintown, PA in our original bakery. We are the Original Pie Shoppe!

The Original Pie Shoppe is a member of these organizations: 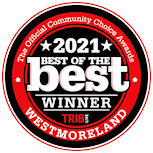